FIFA mobile, a game that updated everything, except for its poor gameplay.

I’ve spent hours across years on this game. Building a formidable line-up from scratch through old-fashioned grinding.

And the update changed everything. All of my effort, all of my player cards collected. Poof.

I was disparaged from restarting this game, until years after. I came back to see everything is evolved. Refined rather, into a new grind inducing beast. Innovative ways to reward players to keep coming back. Adding a daily reward to watch a promoted ad, because even FIFA isn’t above all of this. (Don’t you just love advertising?) 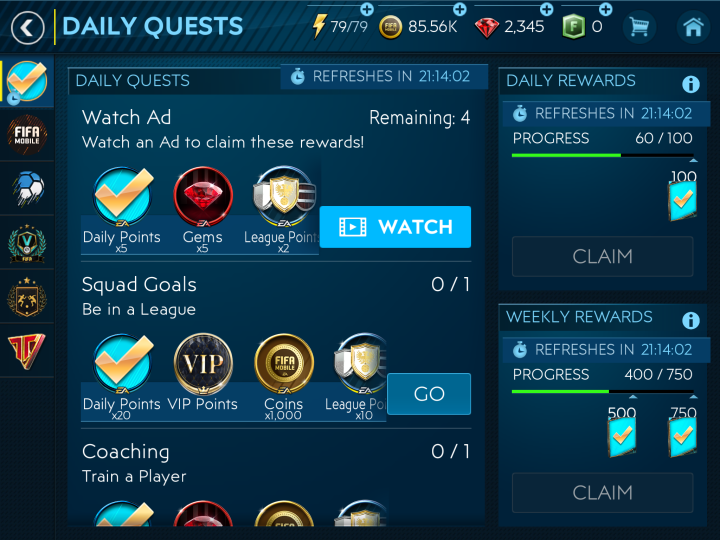 There are ability boosting cards, team chemistry is a crucial element present in the game now. You can’t just create your army of favourite players and smash. They need to work together as a cohesive unit. I’m not much of a fan as it screws up the ‘dream team’ aspect of it, something that made the game such a success. But it offers a tactical challenge for the user to continue playing this game in 2019.

There are now three in-game currencies (which you can purchase using actual currency) and the game keeps prompting you to use the most expensive one of all to skip time-based “packs”, among other purchasing possibilities. I don’t believe anyone spends actual money to skip the time-limit on bronze packs (I mean if you do, how rich are you?) I’m assuming the “pay-to-skip” is largely used by developers and testers who are given those in-game currencies to skip through the grind and check if anything’s broken.

But, come on. This game throws tokens and currencies around for everything. And there are so many, it is hard to keep track without absolutely losing your mind.

What they haven’t changed yet (speaking of broken) is the gameplay. If you grind enough on that game, you’re familiar with every move and gesture of the AI that you face. Your interaction depends on how your team ranks (chemistry and all). You may move past the defender if your team is stronger, and may struggle with simple movements if the team is stronger.

The lack of unpredictability in the gameplay leads you to a self-retrospection that makes you hate yourself for wasting so much time and energy on a card collecting football game. And I call it card collecting over a sports game is because the matches are reasonably automated. If you don’t tap for a few seconds or navigate your players, they still might take the ball and score a goal. It’s programmed to do basic in-game plays. I always get baffled when I miss a tap and my player passes to his teammates and scores a goal. Imagine how many times in “Attack mode” you must’ve lost to a guy who didn’t even score all the goals your side conceded.

FIFA mobile had a lot to fix, but they added more hooks to keep you in the game instead of making the game compelling enough for you to stay. Both outcomes give the makers what they want.

(2.5/5) – because it is unputdownable once you get in the groove. sighs