So I recently got to attend a web series seminar by TVF where they were talking about their rise and dominance in the seemingly impenetrable web content market of India.

A lot of things said and shown there were impressive and aspirational. How a rejected show idea by MTV led a group of individuals to build an empire. An empire that rose out of mocking MTV’s Roadies (rowdies qtiyapa.)

That logic may not be the most agreeable, but it sure turned out to be popular. With intelligent relatable content TVF has been making content that people look forward to. Being it documenting the Qtiyapa that goes behind starting your own successful business or spoofing quirk of a leading TV journalist/personality. Be it questioning the logic of the censor authorities, be it divulging the enlightening discussions lit during tea and smoke sessions. The insights are bull’s eyes on the dart boards. And the finesse is obviously present. But all of it is basically pushing agendas.
And when it’s not that, it’s is subtle (and not so subtle branding exercises)

I was watching TVF Tripling with Tiago the other day. And as evidently it was a show powered by a car brand and a tourism board it was also branded by Ice Burst Cigarettes.

TVF has been known for their smart-integration of brands in their content. And they pride on that too, Uber wale Chacha, Flipkart-friendly father, and obviously the kingfisher powered TVF Pitchers.

Their spoof of ZNMD saw possibly one of the smartest product integrations by sneaking in the premium tinder service as a more-effective means of getting laid in India.

This is no means questioning their ability. In fact, REVHUMAN feels Screen Patti does the wittiest content consistently after their slight rehaul to Bollywood generated meme-ified content from the cult-cinematic 90s throwback builders.

As brilliant as their branding exercises are, calling it a leading youth content creator when they are probably more inclined towards being an ad-agency with its on following where brands are allowed to do risqué content by manipulating the weak IP laws of the internet.

Not that their original content is lacking in anyway, but considering their claim to fame and pillar content are all spoofs of existing things that’s one thing to consider.

The show was basically first-world problems of ‘cool’ siblings with stoner parents. And creative liberty steps in every time there is a ‘yeh real life mein thodi hota hai’ moment.

Encouraging a roadtrip with no destination or planning alongside your siblings makes more sense if you’re rich and one of you is married to a prince of the location of the roadtrip. Picking fights with hilarious pimps and bodyguards doesn’t make sense make much sense though, recommending stoned/drunk driving, starting bonfires in abandoned lands, on India’s largest Youth Content Platform? Preach! Considering their sales pitch involves them explaining how they create content that influences the youth who are smart enough to reject conventional advertising to consume products and services through youthful behaviors…*exhales*

The funny thing is ‘the youth’ themselves have become a brand. Everybody knows what the youth wants and what they don’t. Except for those who actually fit in the category. While the common young lad is fatigued, he looks for something he doesn’t need to apply his mind to, and something that doesn’t have as many intellectual expectations from him as everybody else in his life. But hey if the nice people on the internet say they know what the youth wants then we should give them a chance.

Tripling excels creatively in the acting and the dialogues of the series. ‘Acting is Reacting’ is what some drama teachers teach to fascinated pupils; the acting did steal the cake (or the hash brownies, maybe)

Considering the fact that culmination of all problems of the characters was led by getting stoned and ‘just chilling’:
That looks like something to look forward to. Considering the pace of this article, I’d be recommended to chill and not think too much into it too.

On the closing note of the series it leaves you with a learning that it’s good to have someone to speak to when you have a problem, “crisis mein hi family kaam aati hai.” Where the constantly build up a sibling relationship and then reveal a cool parentage with a psychologist/ understanding mum and a jolly dgaf father.

Also, on more thought, they probably didn’t do justice to Chandan (Sumit Vyas), as they never really addressed his issues of ‘compatibility’. His divorce the reason of infedility and not incompatibility, his one fit of anger in an otherwise chill roadtrip raised issues of compatibility with his siblings.

While Chanchal (Maanvi Gagroo) loses her shit on the persona her husband Pranav (KRK) has created in order to maintain his family legacy, while she herself lied about a pregnancy and had an affair, the latter fact unknown to Pranav.

But hey, let’s have hash brownies!

With this piece I shall sign off for now and not-so-subtly plug-in my brand REVHUMAN, while I go and roll a J while smoking an ice-burst looking at the specifications of the Tiago.

So you please go ahead and like comment share this article with anyone and everyone ’cause after I pride myself with the fact that I influence people like you, I show some humility to nullify the expression. 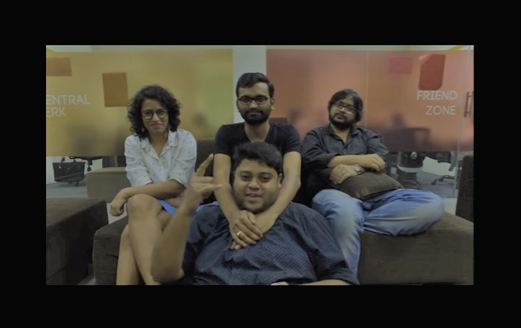 Share your viewpoint in the comments section and let’s take the discussion forward!

0 responses to “WTvF: Tripling’s mostly trippin’ when they ain’t sniffin’”